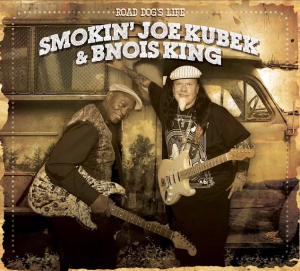 Looking over this CD track list, I had to check out their versions of the the Beatles and Stones songs first.  They definitely did both songs their way.  Stylistically there are some interesting choices made here.  The main thing is, Bnois King has one of the heaviest vibrato voices in the blues .. so his take on these tunes definitely takes the songs somewhere else.  It’s not Texas Blues, it’s not pop, it’s somewhere new ..

The rest of the CD is mainly original blues or blues rock tracks .. and it’s hard to beat SJK and BK on the blues.  Delta Groove Production by Randy Chortkoff is top notch as it always is.  Great special guests on this CD .. Kim Wilson tears it up.

Links to buy online are at Smokin’ Joe’s website ..

Joe Kubek was raised in Irving, Texas, and while still a teenager was playing guitar in the band of the original Texas Cannonball, Freddie King. Kubek went on to forge his aggressive guitar style fronting his own band, and backing many legendary blues artists throughout the ’70s and ’80s, including Al “TNT” Braggs, Little Joe Blue, and others. Influenced by the hard-rocking blues of the ’60s and ’70s, Kubek’s guitar playing smolders with the same fire that burned in the styles of Stevie Ray Vaughan and Johnny Winter, earning him the well-deserved nickname “Smokin’ Joe.”

Bnois King is a native of Monroe, Louisiana. His musical influences come from a generation earlier than Kubek’s, with the smoother sounds of T-Bone Walker and B.B. King in evidence, along with some of the soulful and jazzier sounds of the 1950s and ’60s. He was fronting his own band in the ’80s when he first met Kubek backstage at someone else’s gig. Together this unlikely pair forged a musical bond that has not only lasted the test of time, but continues to flourish. Joe’s hard-edged guitar provides the perfect counter-balance for the jazzy guitar and deep blues vocals of Bnois. King serves to keep their music rooted in the tradition, while Kubek stretches out and provides an energy that has been thrilling audiences over the twenty-plus years of their partnership.