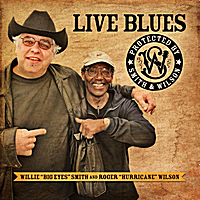 This is a live Duo blues recording .. Willie “Big Eyes” Smith on blues harp and vocals, Roger “Hurricane” Wilson on backing guitar.  Production wise, the guitar is real upfront clear, the vocal/harp sounds a bit distant .. but then it’s live ..

This is front porch blues, folks .. Willie is the real deal in the traditional style.  Nothing fancy or modern here .. in fact the music feels like it could have been recorded in 1959 instead of 2009.  13 songs .. some Willie originals .. and lots of Muddy Waters tunes done Willie’s way.  (Willie played with Muddy)   live Blues by two men who can be described as “the Real Deal”  .. available online

Here’s part of the story of how this CD came to be from Roger’s website:

While he and I were on tour separately in Florida, Willie and I then got together in Tallahassee.
We jammed briefly to see where it would lead. It felt good! I then booked a tour in February of 2009, which took us to Kentucky, Tennessee, and Ohio. Willie and I had a ball gigging, hanging out, and talking, and he especially liked having breakfast at Cracker Barrel. He told me wonderful stories of his years with Muddy, and we just had a great time. We became close friends. He had a lot of energy for a man in his early 70’s, but he was a kid at heart, full of fun. I think sometimes I had a hard time keeping up with him, even being 18 years his junior. We hung out together in Memphis during the Blues Awards in 2009 where Willie picked up his 13th BMA, but he also talked there about looking forward to our next tour.
That next excursion would come in December of 2009 which included stops in Pennsylvania, Maryland, and Ohio. We also made a stop to the Sirius XM Radio studios in Washington, DC, where we were invited by Bill Wax to record some custom tracks for exclusive airplay on B.B. King’s Bluesville. During this time, I was recording the live shows, trying to capture the magic we were experiencing as a duo. That magic happened on December 11, 2009 at the Whitaker Center in Harrisburg, PA., which is the night this CD was recorded. It was a sold out show, and the crowd was there for the Blues. They hung on every note, and like myself, they just loved listening to Willie sing and play the harp. It was extra special for me, since I was there onstage singing and playing guitar with him. When I listened back to the tracks from that night, I finally felt like they had the energy and the result I was looking for. I made a copy for Willie, and he loved it. We were both happy with what we heard, and he, too, wanted to see a CD evolve from it. I just wish he could be here to see it become a reality. Thanks to his family, it has.