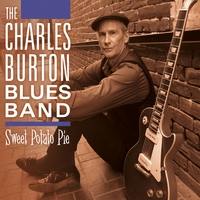 This is the 5th CD for the Charles Burton Band out of San Diego. This is his best CD yet. 13 original blues songs well recorded with a crack band.    Available online by clicking here.

Charles goes through all the different blues groove with blistering guitar on every track.  High energy all the way .. this is a good blues CD for your car on a long drive .. you’ll be there before you know it ..

Here is the Charles Burton Bio from his website:

Born in Los Angeles in 1958, Charles Burton plays with fire, and when he does, his articulation and phrasing are instantly recognizable. This tall drink of water has been playing Blues, Country, Rock, and Roots music for over forty years. He has played lead guitar in Country bands in Los Angeles (1970’s), Honolulu (1980’s), Tokyo (1990’s), and Fresno, California. He headlined the Fresno Blues Festival playing with the late great Hosea Leavy in 1995. As a blues guitarist and singer, he has released four CDs with the Charles Burton Blues Band, and has toured Europe headlining festivals, culture houses, and clubs twice a year since 2005. In 2007/2008 he toured Scandinavia with Maury “Hooter” Saslaff (Big Jack Johnson and the Oilers), playing over 200 gigs in seven months! In 2009 he won San Diego’s International Blues Challenge finals. That same year he took first place in San Diego’s King of the Blues competition. Widely regarded as the best blues guitarist in San Diego, Charles is San Diego’s Blues Ambassador to the world.