BRANDON SANTINI – THIS TIME NEXT YEAR 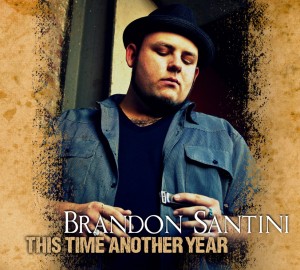 Brandon is from Memphis, formerly with the group Delta Highway, and now he’s stepping out on his own.   The Blues Foundation has nominated Delta Highway for a Blues Music Award.

Brandon Santini’s latest album was recorded at Ardent in Memphis. Like some blues records these days the audio production is basic.  No effects or production frills .. I would have liked to hear some reverb on this one.  The midrange sound and lack of room sound dulls the recording I think.

The standout aspect of this record is .. Brandon gets that heavy harp sound .. and he does it very very well.   As a vocalist though, Brandon is what I would call a blues shouter.  Which works .. but on a few tunes where the song calls for singing a melody, it’s a little rough.  The band is solid .. straight ahead blues players .. the star of this record though is Brandon’s harp work.  12 songs in a variety of blues formats .. all original .. all good blues songs.

There are many different opinions as to what the future of blues harmonica will be. Memphis based Brandon Santini is undeniably a worthy player to keep an eye on as the next decade unfolds. His name is worthy of conversations that involve Jason Ricci, Billy Gibson, Dennis Gruenling, Rick Estrin and other frontline harmonica players that have become part of a new wave in the blues world. With tasteful speed and licks, he combines his respect to traditional blues with a present colorful style of playing. Raised in North Carolina, Brandon relocated to Memphis in 2003 where he began to absorb the sounds and culture of the Delta, honing his craft night after night, sweating it out in local Beale Street clubs just like Robert Johnson, Muddy Waters, & B.B. King. He fronted the Blues Music Award nominated band Delta Highway for six years and is now embarking on a solo career.